The Crusaders brought something back to Europe with them, the secret of a magic that could shape the future of the world.  Some years later, individuals discover that they have previously unsuspected magical talents, which prove to be a mixed blessing. There’s someone behind it, of course, a magician who wants to alter the balance between science and magic for his own purposes. They are supposed to be tools in his plan of conquest, but tools have a habit of turning on their wielders when magic is mixed into the equation. There is nothing particularly new or surprising in this, but it’s a well done variation of several popular fantasy tropes and it was certainly as good or better than a lot of similar titles I see from more mainstream publishers. 3/28/16

The setting for this fantasy novel is 1779 in an alternate Europe where magic exists, although this is as much an historical novel as it is fantasy. The main plot involves a secret scheme to assassinate the Habsburg Emperor. The first protagonist is a famous singer who early on meets an alchemist and – unknown to him – a spy. The second is a recent widow who chafes at the pressures put upon her to act conventionally during her mourning. Intrigue and light adventure follow in due course. I haven’t read any of the author’s previous books, which seem to have been historical fiction, but I would be happy to see more fantasy from her in the future. 3/21/16

Four cousins are reunited, not entirely amicably, in Caveat House, a decaying mansion that belonged to the woman who raised them all, and who recently killed herself with a hand grenade. The house is a strange one, containing mysterious spiderlike drawings which allow people to alter the structure of time so that they can visit the past and the present. There is also a keyboard that types by itself and which may be transcribing the dead woman’s dreams. There is an old family mystery to be solved, and various fraught relationship to be resolved. As always, Powers creates a unique setting and premise against which backdrop several fascinating characters work out their destinies. Not like anything you have ever read before. 3/16/16

Tired of usurped thrones, warring princes, evil sorcerers, raging dragons, ancient evils, and impossible quests? Then this might be the fantasy novel you’ve been looking for. The author – previously known for her work in the YA field – has crafted here an innovative and engaging fantasy about ordinary people in a rather low key fantasy realm. Unhappy with their lives, two people abandon their previous circumstances to join a kind of combination caravan and freelance entertainment troupe on its journey across their world. They have adventures of a sort, but they are generally unmelodramatic and they learn more about themselves than about their companions. A very welcome change of pace, and quite well written. 3/7/16

The narrator of this short novel is looking back on his life – mostly his childhood – when he was an Uphiller, a resident of the barren hills above a small town in a vaguely described fantasy world that shares magic with technology – trains, combustion engines – although the overall level of civilization appears to be almost pre-industrial. His father was a strange man who murdered his mother when the narrator was still quite young. The father, who made magical keys for people, had a habit of killing animals he encountered, beating them to death and throwing them into a bottomless pit. The narrator believes that he also killed people from time to time in the same fashion. Investigators find no body, just a note supposedly by his mother saying that she was going away. He briefly runs away but the police bring him back. And then the census taker comes. This is an odd story that won’t appeal to fans of high adventure or complicated plotting. 3/3/16

I have liked almost everything I have read by this New Zealand author and perhaps most notably the Hythrun Chronicles, which has until now consisted of two trilogies. I suspect this is the first in a third cycle. This one is so complexly plotted that it is difficult to explain briefly. The world has undergone radical changes that were initiated in the previous trilogy so there is considerable turmoil. The chief protagonist is a woman who recently discovered she has noble blood and who decides to marry an aristocrat to escape her domineering father. To that end she and her half sister set out on a journey, during which they swap identities. Their subsequent adventures attract the attention of meddlesome gods, at least one of whom proves to be quite inept. And there are other stories that coil around the core plot and sometimes intercept it. Fallon manages to keep this all straight for the reader and once again brings her imagined world to vivid life. 2/29/16 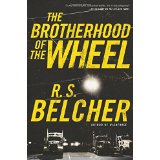 I have long since been overdosed on urban fantasy, not because I don’t like the basic concept but because there has been too much of it and most of the titles I’ve seen consist of retellings of stories by other writers, consciously or not. This one, however, actually tries to do something different and I think it succeeds rather well. A portion of the Knights Templar survived the purge and they continue their duty to protect the traveler from dangers under their new guise – they have all become long haul truck drivers, taxi drivers, etc.  Our hero is a trucker who receives a message from a phantom hitchhiker that causes him to look into the disappearances of a considerable number of children across the country, disappearances that might have an other-worldly cause. This eventually leads him to a mysterious town where he discovers more than he bargained for. I was quite taken with this novel and although I don’t say this too often, I would not be unhappy to see at least a few further adventures using the same basic premise. 2/27/16

The author of this fantasy novel has been quite prolific over the years and I’m surprised he doesn’t have a higher profile because he is one of the better writers working the sword and sorcery side of the fantasy world. His new book, however, is very different and unlike anything I’ve previously read by him. It is set in Chicago during the 1920s and features an immortal man who has become a kind of guardian between our world and a magical alternate realm, his penance for having committed a crime 1600 years earlier. In his spare time, he tries to prevent the death of the woman he loves, who is incarnated repeatedly and who is always in peril. This all leads to a climactic battle involving bootleggers, evil fairies, dark magic, and the apocalypse, and our hero can only resolve the threat if he first resolves a problem within himself. Good stuff. 2/26/16 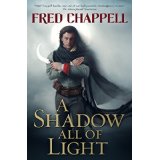 I was not at all surprised to discover that this fantasy novel by Fred Chappell had an unusual premise. His infrequent fiction in the past was always inventive. This one is set in a world where human shadows are not simply the absence of light but have value and existence in and of themselves. The protagonist has decided to pursue a career as a shadow thief and a chunk of the story consists of his training, which is more interesting than you might expect. A series of anecdotal adventures follows. The blurbs compare them to Jack Vance but I would have said they more resembled the Fafhrd and Grey Mouser stories by Fritz Leiber. Whatever their antecedents, they make up some of the most entertaining fantasy adventure I’ve read in some considerable time, mixing swashbuckling with light humor and excellent prose. I kind of hope this is the first in a series, even if we do have too many fantasy series already. 2/24/16

Sequel to A Darker Shade of Magic, which I have not seen. Kell, the protagonist, has the rare talent of being able to travel among various alternate versions of London. In the first book in the series, Kell apparently ran afoul of some sinister magic and ended up in possession of a particularly powerful magical artifact. He is a former smuggler, among other things, although he has lately decided to live a more exemplary life. But something is stirring in Schwab's version of the multiverse, and the rivalries among the various Londons are about to take a whole new turn. The prose here is very fine and even though I hadn't read the first book, I had little difficulty picking up the story - although I will be looking for a copy to find out what I've missed. And it appears Kell will be back  for at least one more adventure. The setting was original enough to be interesting in its own right and the actual plot is well above average. 2/9/16

This is a Pathfinder tie-in novel, all of which used to be published under the Paizo imprint but now appear to be Tor books. It is also part of a subordinate arc of stories within that world that centers on a one time pirate who has now turned into a kind of vigilante who leads his crew against evil men and sometimes not-men.  This time he has quite a job cut out for him because someone has found a magical weapon that is powerful enough that entire nations could be at risk. He sets out on a somewhat routine but nonetheless entertaining fantasy quest adventure, overcoming the usual obstacles along the way. This series has been consistently the best of several fantasy tie-in series that I've sampled, not because the world is so much more original but because the writing has generally been above average and somehow more enthusiastic about the subject matter. 1/24/16