This novella has some SF trappings but it is essentially a fantasy. A minstrel and his wife are waylaid by the minions of a legendary godling. They escape but are trapped in a hidden city where a pair of androids are building a machine that will enable them to rule the world. The godling has retreated into a dream world, but the protagonist wakens him and convinces him to help defeat the androids and keep the world free. The ending is very abrupt and spoils what is otherwise a good adventure tale. 3/24/17

Three sisters who happen to be witches dominate their high school until the arrival of two new students. One is an extremely tall but badly put together boy whose brain is much better than his body. The second is a handsome transfer student who is apparently irresistible to every girl in the school. One of the witches is drawn to the first, but even she finally falls under the hypnotic spell of the other. Obviously these are thinly disguised versions of Frankenstein's monster and Dracula, although of a rather younger age. The monster is the only one who notices that girls who spend time with his unexpected rival sometimes cannot remember what happened and sometimes just plain disappear. This is a frequently clever spoof for young adults, much more entertaining than I expected it to be. 3/15/17

This is a young adult fantasy novel and it is basically an amusing variation of the deal with the devil story. Two women are desperate to have children, so when a visitor arrives with a magic bottle and a suggestion of a solution, they unwisely jump at the chance. Unfortunately, there is a price to pay - there always is. The protagonist, his father, and his uncle are determined to lift the curse, which forces our hero to move every twelve days. The quest to find and defeat the black bottle man is one that will last a lifetime. Very nicely told with unusually strong characterization and a colorful depiction of American history,  particularly in the the Dust Bowl era. Recently reprinted and definitely worth reading. 3/7/17

Third and final volume in the Grudgebearer trilogy. A race of warriors has been fulfilling a group oath to protect another bunch of people in a familiar fantasy world context. Their enemies are barbaric and aggressive, and in volume three they have recruited the undead into their ranks, which may be the final straw to overcome our heroes. Diplomatic negotiations have also been undertaken but they have some unforeseen consequences that further complicates the balance of power. The gods themselves take a hand, but even they have their limitations. Well told fantasy adventure heavily dependent on political maneuvering of various kinds. 3/2/18

The Tufa series is hard to classify. Some of the books seem to me to be clearly horror while others are more contemporary fantasy. They also remind me at times of the Silver John stories by Manly Wade Wellman. Regardless of how you categorize them, they are always worth reading, but the latest I found particularly satisfying as it employs horror tropes, but not always the way one might expect. Something is killing people in the woods, and it may or may not be a giant boar. What is really happening when no one but the victim is around, and do the Tufa have an adequate response? Strongly atmospheric, quite suspenseful, and as well written as are all of Bledsoe’s novels. 2/23/17 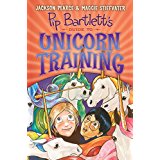 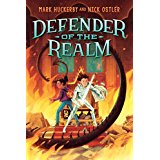 These are both young adult fantasy books, and both for the younger side of that age group. The first title is a first novel set in a fictional version of England which has long been protected by the Defender of the title, although he was believed to be legend rather than fact. Young Prince Alfred is surprised to discover that he must secretly fill that role because it is passed along through the royal family. His already complicated life gets more so when he runs into a girl his own age, who is also startled to discover that the legend is true. They have some mild adventures together. Pip Bartlett, on the other hand, knows that magic is real because she is adept at dealing with magical animals. Her latest assignment is to train a unicorn for a competition, but her new charge is anything but cooperative. Cute at times, but sometimes a little too cute for my taste. 2/22/17

Second in a series in which St. George has become immortal and is currently in 1920s Chicago, protecting the world from powerful faerie magic that sometimes reaches from one world to another. He and his friends have been successful, but the advent of Prohibition and the raging wars among criminal organizations has added an element of uncertainty to the mix. If the world is to remain safe from the land of faerie, then our hero must pull out all the stops and find new ways to fulfill his duties. The unusual timeframe helps this to stand above a lot of fantasy with similar themes and the author’s clear prose keeps the story moving right along. 2/18/17

A group of people who make their living by salvaging sunken ships discover one that had a magical cargo. Included is information which suggests the location of a magical artifact that might solve the secret of the disappearance of an entire race. Unfortunately, their quest becomes known to the inevitable ambitious sorcerer, not to mention a rather annoying godling, and the race is on. High adventure follows in the best tradition of sword and sorcery. This is a Pathfinder tie-in novel, a series that I have found consistently entertaining. 2/2/17

Two very different books here. The first is an amusing steampunk adventure in which genetically altered creatures are on the rampage in an alternate Boston. They have to be hunted down by a team of British Great White Hunters aided by an interloper from our reality who gets caught up in things. This was fun and pretty well written and it's not just a rehash of every other steampunk novel you've already read. The second title is just a short story and it's horror. Marooned in a cabin during an ice storm, the protagonists discover that there is something evil that can influence their actions. This was okay but not nearly as interesting as the other. 1/29/17

This is more of a metaphysical exercise than a novel and I’m afraid I lost interest quite early. It’s about the universe before the universe existed, and it involves God and Satan and their ongoing rivalries and differences of opinion. There are also other avatars of abstract principles who interact. The main theme seems to be the role of death. If you like to play with big ideas and philosophical principles, this might be your cup of tea. If you prefer your narratives to be more conventional, you should approach with caution. 1/25/17

I generally avoid the plot premise for this particular novel – a return of magic to our world in the near future. The government has been replaced by a group of wizards who employ our protagonists – an investigator and his spectral partner – to uncover plots against the status quo. In this case the plot involves a potentially disastrous destruction of a large part of New England. Not surprisingly, they discover that the situation is even more complicated than that and that ancient foes are secretly locked in combat, a situation which eventually puts pressure on the partnership on a personal level. Not badly written and sometimes quite clever, but this is still not one of my favorite story premises. 1/11/17

A man in our world is convinced that he has magical powers, but that magic doesn’t work in our universe. Then he meets a mysterious woman who appears to be the heir to the throne of an alternate reality where magic works. Before long, he is caught between two beautiful women, both of whom claim to be the queen, and he finds himself in a world where his powers can finally be realized. Standard fantasy fare with a nice ocean voyage sequence but nothing else of interest. 1/3/17