I have always rather preferred sword and sorcery to high fantasy, and one of the more reliable sources of the former can be found in game tie-ins, like this one from the Pathfinder series. It makes use of several clichés from that form – the swindler hero, a talking sword – who have various minor adventures before being summoned by a local ruler and given a really daunting task. His quest involves shapechanging enemies as well as more mundane varieties. There isn’t much new in the plot, but that’s not a criticism because this is the kind of story where you know in advance roughly what’s going to happen, and it doesn’t matter. The journey is more important than the destination, and Pratt will take you on a memorable trip through a magical world. 8/28/15

The latest adventure of Langdon St. Ives. A giant sinkhole has opened up under part of London and our hero and two others are authorized to explore the cavern system that has been revealed. A vicious killer has reasons of his own for wanting him to explore without adequate safeguards. A young woman who is a human dowsing rod is kidnapped and taken to London. A government official is murdered, his death arranged to look like suicide. A very rich man has found a new consort who might not be who she says she is. All of these disparate threads get tied together in this adventurous novel set in an alternate England that never existed. 8/27/15

This is one of those novels where a world of magic and monsters exists parallel to our own. The protagonist is one of those acerbic heroes that are common in tough detective novels. He’s on the trail of a Serbian serial killer whose victims may be part of an occult ritual. The chase is a wild one and both parties are armed with powerful magic. I suppose this is technically an urban fantasy but it feels weightier than that, and it has a much more powerful impact, with no side trips into romance with vampires or werewolves. I’ll be watching for more by this author. 8/18/15

One of the problems with high fantasy is in creating a world that is sufficiently different from the standard one to be memorable. Fran Wilde does so in this debut novel, whose protagonist wishes to be trained to fly with artificial aids, but whose future falls into jeopardy when she runs afoul of some societal rules. She is given little choice and faces joining the secretive order that effectively governs, but she is unwilling to give up her lifelong dream and instead leads a double life that will become increasingly dangerous as she learns things about her society that she was not meant to know. I enjoyed this one a great deal and wouldn’t at all mind another look at this world. 8/18/15

First in a series set in a medievalesque world which is recovering from a period of anarchy and banditry. Warriors of either sex who prove themselves in battle will be rewarded with a castle and associated holdings. One young woman who was tutored by a wizard decides to take advantage of this opportunity and she raises an army, not all of whose members are human. The story follows a fairly predictable path with only some minor surprises. The prose is quite good. I would have liked to see something a little more daring or original, but what it does, it does quite well. 8/18/15

This is the sequel to American Craftsmen. That title refers to a group of wizard warriors who secretly live within American society, protecting us from magical and supernatural dangers. The protagonist’s latest mission involves a series of chases through Europe as a plot emerges to eliminate all the magic practitioners, presumably in anticipation of a power grab. Subsidiary protagonists elsewhere face their own challenges thanks to the evil machinations of a single man intent upon eliminating any threats to his power. This has a very different feel than most contemporary fantasies – it’s not quite urban fantasy although it shares some of its attributes. It’s not quite horror, although it reminded me at times of F. Paul Wilson. It was pretty good and I hope to see more. 8/18/15

Third in a young adult series that could be read as light horror or dark fantasy, set in a school of magic that overlaps only slightly with the Harry Potter books. I haven't seen the first two. The protagonist is able to foresee the future by entering other people's dreams, including her boyfriend's, and there she discovers that there is a curse which will prevent them from finding happiness. This is no secret and the school has taken steps to keep them from becoming too intimate. She has also been enlisted in a quest to locate and secure a magical artifact of enormous power. And while she is dealing with both of these issues, there is a murder and one of her friends is the chief suspect. Can she sort out her priorities and deal with the various demands on her time and talent? Of course she can. Although aimed at young adults, I found this quite delightful and have put the first two books on my want list. 8/4/15 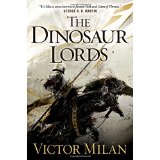 Historically, humans and dinosaurs never co-existed, but in a fantasy world, anything is possible. Victor Milan presents a reality where humans are almost insignificant within a world where dinosaurs predominate. Predatory dinosaurs are used as mounts in warfare and one of the many powers in the world begins to consolidate his holdings, preparing to become the dominant power. More or less opposed to him are a handful of disparate characters none of whom think of themselves as noble warriors. There is a princess and a courtier and a dinosaur wrangler and others all of whom are about to discover that their fates are intertwined. Although things are pretty well tied up at the end, this is the opening volume in a projected series. Most of Milan's work that I've read has consisted of tie ins and series written under house names, but occasionally he produces something original and so far they have all been memorable. 8/2/15 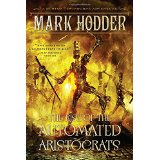 This is the latest in Hodder's steampunk series. Sir Richard Burton traveled through time in the last book and has returned with the secrets of new technologies which he cannot divulge lest he change the course of history. A trusted friend betrays him, however, and the new discoveries are quickly put into production, altering the world dramatically in just a short period of time. Their new power causes the aristocrats to become repressive and corrupt, and Burton finds himself fighting with the rebels against the government he has served for so long. This was a very good series up to the previous book. I thought the time travel device blurred reality too much and the subsequent developments this time bother me even more. Hodder had a nice series going but his introduction of new and wildly different plot elements disrupted rather than enhanced the series. 8/1/15

This is a collection of mostly fantasy stories, only two of which I had previously read. One of the things I liked best about this particular selection is that I never knew what to expect from one story to the next. Sometimes they're realistic, sometimes surrealistic, and mostly somewhere in between. I particularly enjoyed "Annual Dues," "On the Freedom of Agency and the Finding of Lost Hearts," and "A Symmetry of Serpents and Doves" were my particular favorites. There are interesting story notes gathered at the end of the book. Scholes has the ability to adopt odd viewpoints that give his stories a very different taste. Fantasy writers are more likely to write novels than in either SF and Fantasy, and when they do write short fiction it is often set in the worlds that they have already created. Scholes invents new and interesting realities for each of his stories, and that makes them exceptional.7/30/15

Fourth in the Craft sequence. In the first three, the rather unusual set of gods reigning in a fantasy world were overthrown, more or less, but trappings of their rule still persist. The inhabitants of a great city have a dilemma. If the lingering magical protection provided by the gods should fail, monstrous creatures would be able to attack. But as long as they persist, it is impossible for the city to really advance. This conflict threatens to break out into a degree of civil war, which won't help either side. I like this series better than most because each installment is reasonably complete in itself, and I suspect I could have read them out of order without any difficulty. It doesn't hurt that they are well written on top of that. The setting has enough innovation to be interesting and several of the characters have actual depth. I doubt we've seen the last of this series. 7/28/15

Sequel to The Just City. A goddess created a mystical city in the ancient Mediterranean which was populated by people drawn out of various stages of human history. Twenty years after its creation it has effective split into several subsidiary communities and despite its supposed organization as a utopian society, it has become fractious, troubled, and even violent. Another God, Apollo, has voluntarily become a mortal and sought happiness in the city but the passage have time has left him bitter and resentful of others. He and a group of companions choose to travel away from the city in pursuit of a particular man who has wronged him and this quest/journey makes up the bulk of the story. Little do they know that this will all lead to a new future for the fractured city and its inhabitants, as Zeus himself must finally intervene. Filled with intelligent dialogue, interesting concepts, and well wrought characters. This won't appeal to those looking for swordplay and evil sorcery, but if you're seeking intelligent and thoughtful fantasy, this is where you need to look. 7/6/15