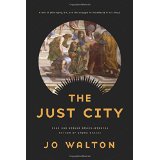 One never knows what to expect from a new Jo Walton novel. A time traveling goddess creates a model city in the distant past, populating it mostly with children and a few teachers drawn from various periods of history, augmented by robots from the far future. Apollo, a god himself, decides that humans can perceive and understand things impenetrable to the gods so he incarnates himself as one of the children in the city. Eventually the goddess brings Socrates to the city and he is the stimulus for a wave of change. The commentary of Socrates on the philosophy of Plato makes up a good deal of the second half of the book. This makes it sound deadly dull, I'm afraid, which is not at all the case. Walton manages to make ideas and their conflict with one another exciting and naturally her prose is a joy to read as always. This one might puzzle some fantasy readers who prefer more traditional plots but it will be rewarding to those who like to have their thoughts stimulated along with their imaginations. 12/28/14

It's been too long since the last Jonathan Carroll novel. This one is, as you might expect, rather difficult to describe but it involves a group of fully realized characters who all share the same dream one night and then discover that they have paranormal abilities. I'm not usually thrilled with dream sequences but in this case I make an exception since that's the point, rather than a distraction. The explanation of what they are and why this is happening to them would sound silly if badly stated, but it makes much greater sense in context and as it is slowly revealed. I suspect that some readers will feel lost because Carroll doesn't spell out every detail and one has to actually think about what's happening but anyone who has enjoyed his earlier work is going to be very pleased with his latest. 12/25/14

A Rogue Angel novel, this one written by Mel Odom, who has done several of the best in this series. Annja Creed is called in by the police when a murder takes place at the site where an artifact is stolen. The artifact is a key that once belonged to Catherine the Great which, it is rumored, is a clue to the location of a lost treasure. Naturally that attracts a flock of bad guys just as happens in virtually every book in this series. With her magic sword and a new, temporary, companion at arms, she has to foil the bad guy and stay alive in the process. This series is very formulaic, by intention, and while it doesn't work well if you read a lot of them at once, the individual titles are spaced out well enough that I almost always find them fun to read. 12/22/14

This is, I believe, the 50th adventure of Annja Creed, Rogue Angel, the archaeologist with the magical sword of Joan of Arc. This is a house pseudonym used in this case by Steven Savile. Something odd is going on in Wales. A minor artifact is stolen from a museum and a curate is murdered when he stumbles upon a grave robbery in progress. Creed learns that someone is seeking a collection of lost British treasures which, when united, are supposed to provide mystical power to their possessor. And this time her opponent has a magical sword as well. These are light adventure stories but they are generally, like this one, entertaining and fast moving. 12/19/14 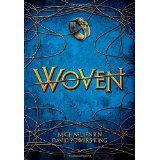 A young adult fantasy. A young man who wished to be a knight despite his humble origins is mysteriously murdered, but he returns as a ghost. In that form, he is only visible to a princess who is understandably unsettled when he first appears to her. Together they discover a threat that menaces their entire world and they have to thwart it before he becomes untethered from the world of the living entirely. So they set off for the predictable although generally entertaining series of adventures, encountering magic and villainy and picking up allies along the way. And our hero discovers that there is a chance he might be restored to life while the princess realizes that she has fallen in love with him. This was quite good and as far as I could tell, it's not the first in a series, although there is a hook left suggesting that possibility. 12/11/14

First in the Nnewts series of graphic novels. The Nnewts are intelligent newts, more or less. The protagonist is a young Nnewt who is not the physical equal of his peers, but he has to head for the hills when the nasty lizzarks attack his village. A series of adventures follows in which he discovers that his wits are more important than his muscles. This is a full color graphic novel and the artwork is really quite nice given the subject matter. This is really aimed at fairly young readers so adults might well just look at the pictures and ignore the text. 12/11/14

This is a surreal fantasy and I was rather surprised to first read this in Amazing Stories back in 1960.  An unnamed state governor gives in to a whim and decides to spend the night at a rundown hotel, but he is immediately immersed in a world of strange people and creatures, including a unicorn, rooms that change their relationship to one another, bizarre architecture, and other oddities. Although we follow the governor through a series of these encounters, there really isn’t a formal plot, just a succession of fantastic images. This is not like anything else Moore ever wrote but while it might have been amusing if it had been shorter, it becomes progressively less interesting as it wanders about. 12/2/14 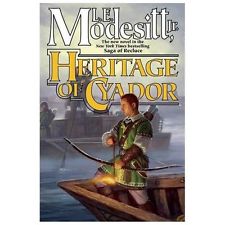 Eighteenth book in the Recluce series, if I'm counting correctly. Fortunately almost all of them are standalones like this one, with a common setting. This was the author's first major series and although I've liked some of his newer sequences better, that doesn't mean I didn't enjoy his early work. This is one of those fantasy worlds where Order and Chaos are opposing forces. The protagonist, who first appeared in Cyador's Heirs I believe, is sent on a military intelligence mission into the land of a former enemy to investigate rumors that a third nation is planning an invasion, which will stack the odds against his own country. I can't honestly say that I enjoyed this because it's written in first person, which I find particularly inappropriate in an adventure story, but fans of the series who don't have that problem should like it fine. 11/25/14

Jarvis was a house pseudonym and this is one of the stories whose real author has never been identified. It’s actually surprisingly good. Two actors whose careers are on the way down agree to take roles in the cheap SF movie of the title, which is about a robot rampaging through a swamp. They suddenly find they have changed places with two people from the real Suicide Swamp, threatened by a mysterious figure known as the Prophet, while the couple from that location appear on the movie set. Since they are identical, no one else notices the switch. There’s a problem with the set up. The actors are in their late twenties but in their new roles they appear to be teenagers, which can’t be possible since the swamp people are now impersonating the actors.  The actors solve the mystery of the missing loot from a bank robbery and decide they like their new lives better than the old ones.  11/10/14 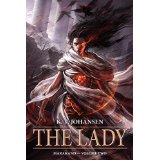 Second in the Marakand series following the pretty good The Leopard. The immortal assassin from the first book, possessed by a ghostly spirit and enslaved by a sorceress, is still plotting to regain his freedom and find a way to end his life. The second protagonist, a determined young woman, is traveling into strange lands in search of allies to help her own people fight against their oppressors, who happen to be ruled by the same sorceress, putting her into opposition with the assassin. There’s also a link to the author’s first novel, Blackdog, a rebellion, a shapeshifter, and a large supporting cast of characters. Although enjoyable enough, I found this one a little too crowded with subplots to be smooth reading. I had to keep resetting my immersion in the book to accommodate the changing situations. 11/9/14

The protagonist knows that he should be happy with his life, but he feels an odd discontent that becomes alarm when his fiancé, her family, and her house disappear suddenly not only physically but from everyone’s memory except his. Then he overhears three mysterious men talking about translating people back and forth to another reality named Drendon, during which the physical properties of the transportee are changed. Except that he then is visited by the transformed people he knew under their previous identities, now in the form of woodnymph, faun, and witch. The adventures that follow are silly and sometimes tedious. This is the weakest novel I’ve ever read by Sharkey. 10/18/14

Here’s an unusual fantasy for you. The inhabitants of a small group of islands are predominantly pirates and raiders who use magic to change the reefs protecting their homeland into ships with which to conduct their attacks.  A young woman catches the eye of the local King and both of them ignore the objections of their families to become lovers, with the woman – Jala – eventually installed as the new queen. She begins to have second thoughts when faced with the hostility of the courtiers, advisers, and population in general, and is put off by the constant intriguing at court. Then an outside menace throws a whole handful of new variables into the equation. This is pretty much a complete story but there’s an obvious hook for a sequel. Although the basic plot is not particularly original, the authors – husband and wife – have created a culture that is sufficiently different to be interesting in itself. 10/14/14

This episodic novel is set in an alternate fantasy world where Ireland is dominant and the rest of the world is very different, given that there was no British Empire as we know it. There are political intrigues and personal rivalries spread throughout the stories, which are also separated by time, ending with one that sees Eire on the verge of moving into the equivalent of our world's industrial age. One portion is an adventure story involving a spy and another is essentially a murder mystery. It's one of those worlds where science and magic are intertwined. Although the stories could easily have been published individually I believe this is their first appearance. Nice clean prose, some interesting characters, and substantial plot variation. 10/3/14

Here’s a fantasy novel for readers tired of castles and swordplay and elves and all the other currently popular fantasy tropes, even though some of them do appear, though greatly transformed. The two protagonists are a golem and a fairy. The golem is built by a necromancer, from whom he escapes in company with the fairy. Their journey takes them across historical Europe with a side trip to Hell, during which they spend a good deal of time contemplating the nature and consequences of immortality. The narrative switches back and forth from present to past tense narration, which is sometimes distracting, but the prose is otherwise marvelous throughout. 10/1/14