The third in the ghost series – a superhero in an alternate New York City – moves fully into fantasy despite the scientific trappings. Our hero’s girlfriend has disappeared just as he is getting mixed up in a battle with a criminal gang that is creating armored thugs to enforce its will. She has been abducted, we discover, by the Cult of Thoth, who are dedicated to awakening ancient Egyptian deities and assert their power over the world. The supernatural elements are not rationalized at all – this is genuine magic. The result is a blend of steampunk and dark fantasy that works surprisingly well. I was sucked in very early and read it through in essentially a single sitting. Mann is one of the best at this sort of thing. 6/22/16

This is the ninth and apparently final installment in the Symphony of Ages series. After centuries of peace, the world is threatened with civil war. The split causes families and friendships to be rent asunder. The resolution of all this involves quests and legends and other familiar elements of contemporary fantasy, although as usual Haydon manages to make them seem fresh and inventive. As with the other books in the series, there is less melodrama than you might expect given the plot. A good deal of the conflict is interpersonal and not physical, although there is some of that as well. I was expecting a somewhat more rousing conclusion but that would not have been appropriate to the series. I found this series to be one that I could only read when I was in the right mood, and very rewarding when that was the case. 6/6/16

A young woman who aspires to be a stage actress but who seems fated for a less mundane life comes from a family constrained by secrets. When she is given an account of a woman who – accompanied by an entity who may have come from another dimension – toured Paris and Chicago during the 19th Century – it raises more questions than ever. Before long we are pulled into a world of ghosts, sea monsters, all of it revolving around the manuscript. Although I thought this was slightly too long for its story, it moves quite quickly and smoothly and there are some very interesting twists woven into the plot. There are elements of urban fantasy, although it doesn’t descend into cliché, and there is almost a mythological feel to the background. I like the unusual in my fantasy, and this certainly meets that criterion. 6/1/16 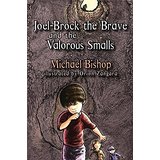 Growing up is overrated and putting childish things behind you is a stupid thing to do. We need to hang onto the good parts of childhood even as we accumulate the good things of maturity. So I occasionally read YA and children’s books, and a lot of the time I like them. It takes a little effort to turn down the adult part of my brain that might find young heroes a bit implausible, but reading SF and fantasy requires one to cultivate that kind of talent. So here is the first Michael Bishop novel in way too many years and it’s a children’s book. Joel-Brock’s family has been abducted by parties unknown and his mother has left him a note warning him not to tell anyone. But that doesn’t mean he can’t do some investigating on his own. This leads him to a marvelously diverse and amusing hidden world where he has various adventures in his search for his family. You don’t have to be a kid to enjoy this story. You just have to remember how to think like one. 5/31/16

This is part of a subset series within the Pathfinder universe, although the latter is pretty much a generic sword and sorcery world, so it doesn’t matter that much. The hero is a good nature criminal with a talking sword who gets caught during his latest endeavor. Rather than face a more dire punishment, he agrees to join a special group of similar miscreants who serve as a kind of unofficial police adjunct. And then we’re off to the races for a series of familiar but amusing variations of standard s&s adventures. The Liar series reminds me a little bit of Fritz Leiber, with the bantering hero and dangers that are light hearted even when at their most terrible. We need more stories of this sort and fewer usurped thrones and sorcerous wars.  5/27/16

Vond is a small empire on the outskirts of Ethshar with little contact with the greater powers until an ambassador appears with no warning or fanfare. He employs a dock worker – the narrator – as his assistant and sets out to confer with various magicians of different schools, but that part of his mission is initially secret. Eventually we, and the narrator, learn that he is trying to find a way to silencer a source of power that enables warlocks to perform powerful magical feats because he fears this will destabilize the world, but others misconstrue his motives and believe he is trying to recruit them, and it’s not long before assassins are on his trail. This is a quietly entertaining fantasy novel whose plot and characters are all appealing. The absence of clashing armies, evil sorcerers, and palace intrigues is quite refreshing. 5/22/16

A novel of Ethshar. A young girl finds a magical artifact in the woods near her rural home. Her brother, the protagonist, takes it to the nearby barony to find out its nature, only to have it expropriated by the baron himself.  The brother subsequently discovers that his sister has been meeting with a not entirely human warrior who fought for the now mostly extinct Northerners, and who would be a terrifying figure for most of those still alive, although he now seems resigned and peaceful. The two rival powers in the region both learn of his existence and both want him as an ally.  It eventually appears that they might go to war to get him, so he fakes his own death. One of the things I like about the author’s fantasy is that it is not about princes and knights and powerful sorcerers all the time but often deals with common people and how they are affected by events. This is an excellent example of it. 5/20/16

This is the opening volume in the California Demonic series. It’s set in the near future in an alternate world where the Confederacy won the Civil War and the British Empire never fell. Slavery was not abolished until the 20th Century. It’s a kind of mashup of steampunk, alternate history, technology, and magic, since the latter exists as well. There are also inhuman creatures to be found if one knows where to look. But despite its differences, the world also looks and functions a lot like our own. And it all builds up to an orgy of carnage. The story in this one is well constructed and the world building is fine. The prose has a few rough spots where it seems awkward, which in our new world where line editing pretty much doesn’t exist, that’s not unusual.  Ambitious for a first novel, but it’s always good to set our sights high. 5/20/16

Henry Leach is a young man who discovers that he comes from a family noted for the manufacture of magic wands. He also practices magic and generates a small crisis when his younger sister interferes in his attempt to cast a spell. His only hope of restoring her to her original state involves an appeal to a master practitioner, and this leads him to make the acquaintance of a falcon that is more than just an animal. And then he’s off on a quest. It is tempting to compare this to Harry Potter except that it’s quite a different sort of story and is much less serious in tone. There is never any real concern that permanent harm will come to the protagonists. Although perhaps a bit light for adult readers, the story moves well and I found myself drawn in more than in a lot of other YA fantasy. 5/4/16

The author of this new historical fantasy has previously proven his ability to create a believable vision of the past, although one in which the laws of nature aren’t exactly the same as those of our world and the course of events is different. This one is set in one of those alternate pasts, one in which a powerful khalif has dispatched an army to seize control of one of the main passages into Europe. A handful of characters are caught up in the growing tension as the war threatens to break out and it is their story rather than the greater conflict that concerns us here. I have always been impressed by Kay’s ability to create characters who actually seem to be people, with conflicting motives, self doubts, but the ability to find the courage within themselves when it is necessary to do so. This is almost certainly going to be one of the major fantasy novels of 2016. 5/1/16

This is the second in the Kharkanas trilogy, which is set in the same universe as the author's Malazan series, but much earlier in time. The land has been plunged into civil war but the rebels against the repressive ruler are on the ropes, their leadership scattered and their resources failing. In addition to the military struggle, there are political maneuvers which, unfortunately, involve some very dangerous sorcerous powers. Even outside the main battle lines, chaos seems to be growing as the large cast of characters congeals into several competing conglomerations. The complexity of the situation - not to mention the plot - threatens to lead to a complete breakdown of order. This is the middle volume, traditionally the weakest, but I found it more engrossing than the first. Erikson ratchets up the tension skillfully and sets the stage for the third. I strongly suggest reading Forge of Darkness first. You could probably follow this one without having done so, but it would be a chore. It's also quite long and meaty - I spent two full days on it. 4/18/16

This is the latest Pathfinder tie-in novel, although like the others it is more generic sword and sorcery adventure and not really specific to the game, so you don’t need to be familiar with it. This one involves the Hellknights, who are a kind of quasi-official police force who use magic and brutality to ensure that no one breaks the law on their watch. The protagonist is an investigator for this organization who believes in its methods and purpose, but who begins to question things while pursuing a magically empowered serial killer. It even appears that others in her organization may be covering up for the killer. I liked the police procedural intermixture in this one, and I’ve liked the previous books I’ve read by this author, so I was expecting – and found – an entertaining story. 4/5/6